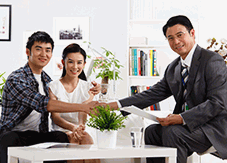 The Company collected more than RMB 190 billion of premium. It has a steady ranking of No. 1 in Asia, and the 2nd place among the single-branded property insurance companies in the world.